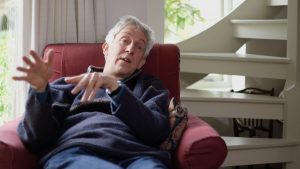 We spent a wonderful morning with Daniel Meadows discussing the influence of Bill Jay on his work and career. Daniel was in the same class as Martin Parr at Manchester Polytechnic where Bill gave a talk in 1971 that influenced Daniel and Martin in the ways in which they viewed photography. Another great interview for the film, thanks Daniel!