We are currently organising screenings for the film in the UK and North America all of which will be announced here as soon as they are confirmed. The film will then be entered for competitions and festivals internationally throughout 2019. It will then be available on a streaming platform to rent and download. It may be available on DVD on demand but this will not be the case until 2020 at least. If you have any further questions concerning seeing the film or collaborating on a screening please email us through this website. 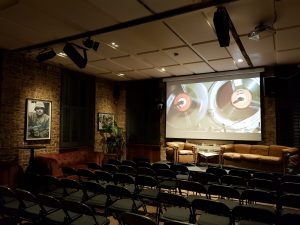 Thanks also to Michael Pritchard and the Royal Photographic Society for hosting the recent London screening of the film at the Frontline Club, Paddington. 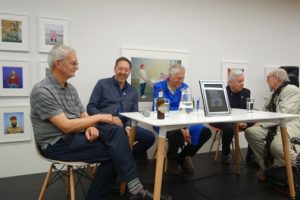 Thanks to Martin Parr for hosting the world premiere of the film at the Martin Parr Foundation, Bristol. Thanks also to all of those who attended particularly Martin Parr, Daniel Meadows, Brian Griffin and David Hurn for taking part in the post screening panel discussion with the film’s co-producer and director Grant Scott. 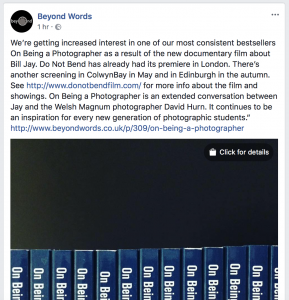 “Great film, thank you so much for making this. Really, really interesting. I am absolutely sure it will be a great success.” Homer Sykes
“Great stuff! I loved it!” Jake Chessum
“A magnificent and polished achievement” Patrick Ward
“This is a film made with a single-minded dedication reminiscent of Bill himself.” Tristram Powell
“How could Bill NOT have appreciated a film that is such a handsome tribute to his achievement?” Bryn Campbell
“Such an absorbing film. Bill Jay brought us a great gift and this film renews it.” Paddy Summerfield
“I just finished watching Do Not Bend. Very beautiful work. Thank you for including me in this homage. It was an honour.” Ralph Gibson
“Many congratulations on the Bill Jay film.  So many people I’ve spoken to, both at the event on Friday night and subsequently, seem to have enjoyed it, learned something from it and, most importantly, are glad to have this lasting memory of Bill.” Daniel Meadows
“The greatest failing of the human race is never learning from history, Do Not Bend gives us no chance to do that, it’s here and it’s vital, it is now…”
Jim Mortram
“This film is a revelation in so many ways with not only reminders of his achievements and maverick nature, but there is also so much I did not know about him.If you want to know about this seminal and fascinating era of British photography catch Do Not Bend.”
Paul Hill
“I think the one-real achievement of the film, is to put on record the life and work of Bill Jay whose contribution has been known but never recognised.” Martin Parr
“I just finished watching the film.  I loved it.  I am feeling very nostalgic now and have been writing colleagues and friends of Bill just to reminisce about our friend and mentor. You did a fantastic job.” Jared Platt

“Beautifully done, flawless editing, a terrific job of telling Bill’s story”
“Love this film! Bill the Photo-Evangelist.”
“Job well done. I shed a tear or two because you nailed it.”
“What a fascinating story, beautifully told.”
“What a wonderful and informative movie.”
“WOW!!! What a lovely touching tribute to a fantastic man.”
“Such an inspirational film. Photographers, check it out!”
“An insightful and sensitive film on photography evangelist Bill Jay”
“Inspirational and thought provoking”
“Excellent and tender film”
“A great tribute and fascinating story”
“Amazing work, proof again that passion is more important than money and that good ideas just have to live.”
“Poignant, funny & genuinely illuminating. A labour of love well worth seeing if you get the chance.”
“Can’t recommend enough – and is it not time to learn from these pioneers once again”
“What a wonderful film, really interesting, full of brilliant Bill Jay insights and entertaining. Everyone I spoke to at the screening loved it.”
“A thoughtful and multifaceted tribute to such a galvanising force”
“Win, Win! An education”
“Such a moving and inspiring film.”
“This film is riveting – a passionate, fascinating and educational documentary about the extraordinary photographer/writer/teacher/editor Bill Jay”
“Bill Jay was a name everyone seemed to mention over the years, but I never really understood his importance, Now I do!”

We are delighted to announce that we are collaborating with the Royal Photographic Society in staging the one and only London screening of Do Not Bend: The Photographic Life of Bill Jay at the Frontline Club. Tickets are on sale now http://rps.org/events/2018/may/08/do-not-bend

We are delighted to announce that we are working with Edinburgh Napier University and their Chancellor photographer David Eustace to host the only Scottish screening of the film on 26th September 2018. We can confirm that we will be hosting a drinks reception before the film and bringing together a panel of some of Scotland’s most respected and leading figures in the medium together to form a Q+A discussion panel. The film screening will be followed by a Q&A with film Co-producer and Director Grant Scott, alongside Malcolm Dickson, Director of Street Level Photoworks, Ben Harman, Director of Stills Gallery, Edinburgh Napier Honorary Fellow, Robin Gillanders, and Annie Lyden of The National Galleries of Scotland.

You can purchase tickets at https://store.napier.ac.uk/product-catalogue/creative-industries/events/do-not-bend-the-photographic-life-of-bill-jay-26th-september-2018

We are very pleased and excited to announce the second UK screening of Do Not Bend: The Photographic Life of Bill Jay and an accompanying exhibition of Bill’s portraits of UK based photographers. The exhibition will be open from Saturday 12th May – Saturday 30th June 2018.

DO NOT BEND: THE PHOTOGRAPHIC LIFE OF BILL JAY
Oriel Colwyn/Theatr Colwyn

Following the film screening, co-producers Grant Scott and Tim Pellatt will host a discussion on Bill Jay’s impact on the world of photography and share their experience of producing the film with limited budget and resources.

Film and discussion suitable for ages 15+

Tickets can be purchased at http://orielcolwyn.org

A book published by www.caferoyalbooks.com titled Do Not Bend: The Photographic Life of Bill Jay that accompanies the exhibition will be available online and at the gallery.

We are excited and pleased to be working with Craig Aitkinson and Cafe Royal Books www.caferoyalbooks.com on a book to accompany the film featuring Bill’s portraits of UK based photographers. It will go on sale to coincide with the premiere of the film on the 20th April.

We are proud to announce that www.donotbendfilm.com will premiere in the UK on 20th April at the Martin Parr Foundation, Bristol including a panel discussion including David Hurn, Brian Griffin, Daniel Meadows and me, chaired by Martin Parr.

Tickets can be purchased here: https://www.martinparrfoundation.org/…/british-photography…/